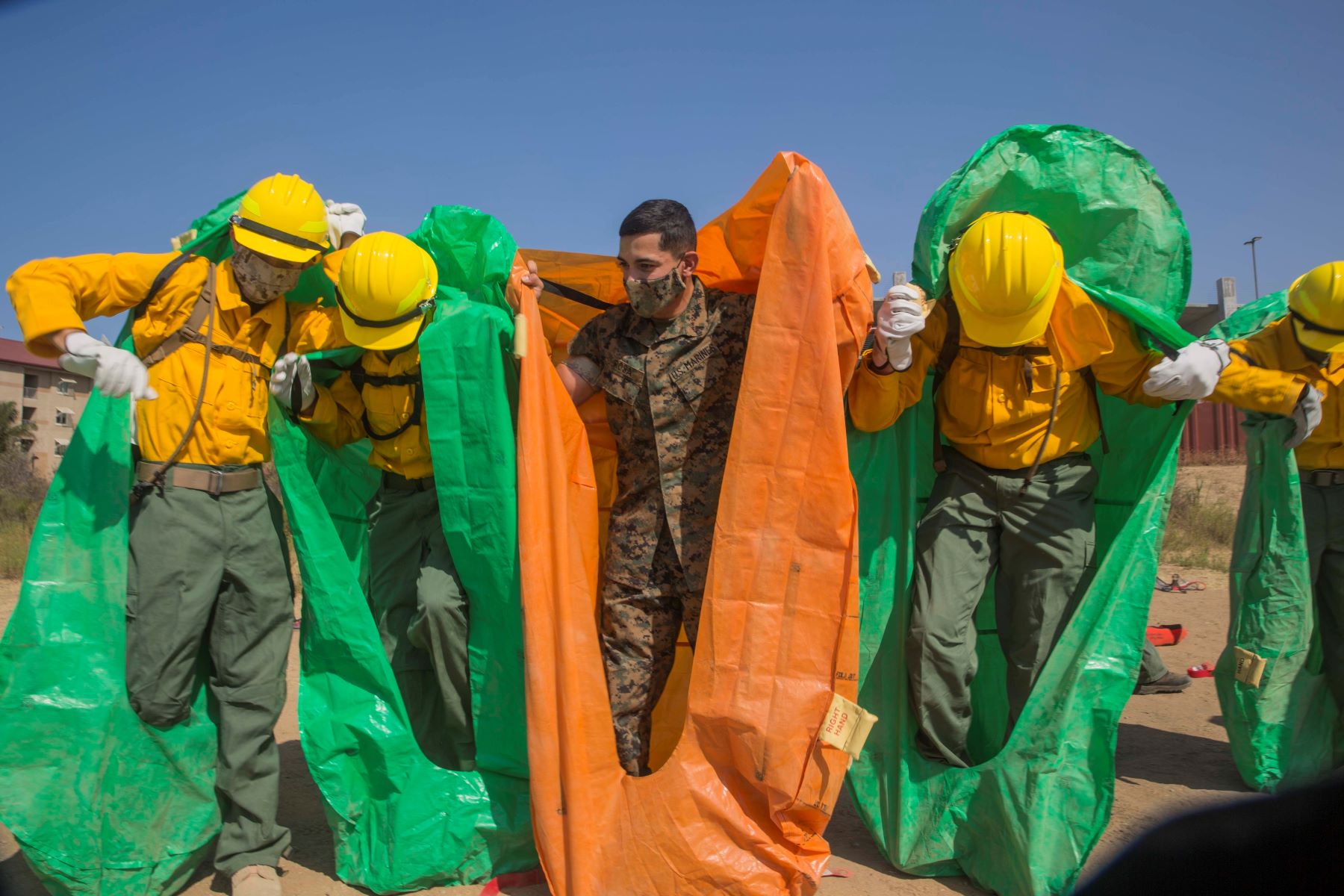 But on Friday, the 19-year-old motor vehicle operator was preparing for a different kind of fight, one she never imagined when she joined the military.

Urias is among 250 Camp Pendleton Marines and sailors who are deploying to the front lines of a wildland fire burning in the Sierra National Forest outside Fresno, according to the U.S. Army Northern Command, which is in charge of the military response to an active wildfire season in the West. The Creek Fire has scorched nearly 250,000 acres since Sept. 4.

The deploying troops, who are comprised mainly of Marines plus about a dozen Navy corpsman, are assigned to the 7th Marine Logistics Group. Most of them volunteered for the duty, a chance to protect people’s homes but also provide much-needed relief to exhausted, thinly stretched professional fire crews, according to the unit’s commanding officer, Lt. Col. Melina Mesta.

“I think this speaks to the character of our Marines and sailors where we actually had more folks volunteer than spots available,” Mesta told reporters at Marine Corps Base Camp Pendleton Friday.

Mesta said her unit has been preparing for a few weeks and knew they could be called to help. That call came earlier this week, she said.

Many of the Marines heading to fight the fire, such as Urias, are engineers with experience working with machinery, such as bulldozers and chainsaws, that are key in establishing and reinforcing fire lines.

Urias, who graduated from Vista High School in 2018, said she was nervous about going up against a new enemy but was compelled to help. “I felt that little call,” she said.

The Marines and sailors will leave the base Saturday and still have a couple days of on-the-job training to complete before officially joining the fight, according to Isaac Tzintzun, 38, a Bureau of Land Management wildland firefighter who will be working directly with the Marines. Tzintzun, who himself is a Marine Corps veteran, is part of a wildland firefighting crew out of Wyoming that is one of several BLM firefighting units comprised mainly of military veterans. It’s why, he said, they’ve been tapped to work with these Marines.

“The thing you want them to have â€” which they already have â€” is discipline,” Tzintzun said. “On the fire line, you have to listen to your leader without even hesitating. They already have that instilled in them.”

Marines and sailors rotated between separate training stations to learn about basic firefighting safety measures and procedures, such as how to tackle small spot fires and how to deploy fire shelters in case of an emergency.

Training technicians from the U.S. Forest Service were on hand to administer and oversee the training.

Hospital Corpsman 3rd Class Emily Beher, 23, said her job will be to keep the Marines healthy in the fight under hot and dangerous conditions. Beher said she never imagined when she joined the Navy as a corpsman she’d ever deploy to help fight a wildfire.

“I’ve never seen anything like this,” she said. “I’m from Wisconsin â€” we don’t have any wildfires at all. It’s exciting to help and support our country and this state.”

Other military teams have already been called to assist in what’s started as a busy wildfire season. About 250 U.S. Army soldiers from the 14th Brigade Engineer Battalion out of Joint Base Lewis-McChord in Washington also deployed and are helping fight the August Complex fire in Northern California.

According to the National Interagency Fire Center, which coordinates the federal government response to wildfires, there are now 106 large wildfires burning across the western U.S., and almost 6.7 million acres have burned in 2020.

This article is written by Andrew Dyer from The San Diego Union-Tribune and was legally licensed via the Tribune Content Agency through the Industry Dive publisher network. Please direct all licensing questions to [email protected]

© Copyright 2020 The San Diego Union-Tribune. All rights reserved. This material may not be published, broadcast, rewritten or redistributed.