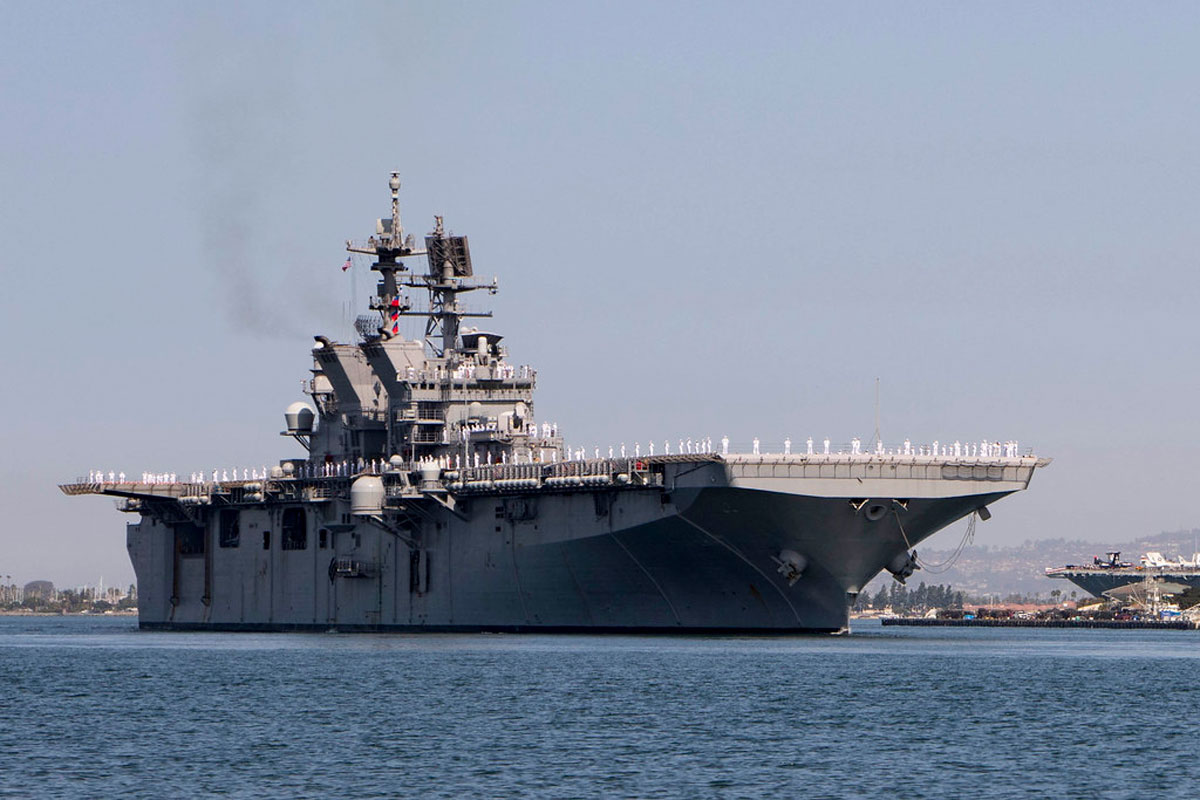 After a trip around South America, the USS Tripoli has arrived in San Diego and will be used to deploy Marines and their aircraft worldwide.

The America Class amphibious assault ship — the only one of its kind in San Diego — was virtually commissioned July 15 at its shipyard in Pascagoula, Miss. The ship arrived in San Diego on Sept. 18.

“Our sailors did an outstanding job in getting Tripoli safely to our new home port,” said Capt. Kevin Meyers, the Tripoli’s commanding officer. “Now, we shift our focus to preparing this ship for her future mission: supporting combat operations and providing humanitarian assistance around the globe, in the air, on land, and sea.”

With the ship comes 1,100 sailors and their families.

The ship joins other Wasp-class, large-deck amphibious assault vessels including the USS Essex, the USS Boxer and the USS Makin Island. The USS Bonhomme Richard was also being retrofitted in San Diego to carry the Marine Corps’ aircraft, when fire broke out on July 12 in its lower vehicle storage area and damaged 11 of the ship’s decks. Investigations are ongoing.

Unlike the 20-year-old Bonhomme Richard, the Tripoli comes with an enlarged hangar deck and aviation maintenance facilities.

A year ago, Marine Corps Commandant Gen. David Berger laid out his plans for a leaner and meaner Marine Corps. He has emphasized returning the Marine Corps to its forward-deployed expeditionary roots with the Navy.

The USS Tripoli, now the largest amphibious ship on the waterfront, will help with this mission and accommodate the Marine Corps’ F-35B Lightning II and MV-22 Osprey.

The USS Tripoli is also likely to appear at Naval Weapons Station Seal Beach, but probably not before 2025. The weapon station is currently undergoing a $150 million renovation project in which its ammunition pier, where U.S. Navy ships load and unload ammunition, is being relocated.

“Once we finish out replacement project, she (USS Tripoli) will be able to fit into the harbor,” said Gregg Smith, spokesman for the Naval Base.

The ship is third in naval history to bear the name Tripoli, which memorializes the first U.S. battle on foreign soil. The name was previously assigned to an escort-carrier, which served in World War II. The first amphibious assault ship with the same name served in Vietnam and during the Gulf War.

This article is written by Erika I. Ritchie from Orange County Register and was legally licensed via the Tribune Content Agency through the Industry Dive publisher network. Please direct all licensing questions to legal@industrydive.com.

© Copyright 2020 Orange County Register. All rights reserved. This material may not be published, broadcast, rewritten or redistributed.