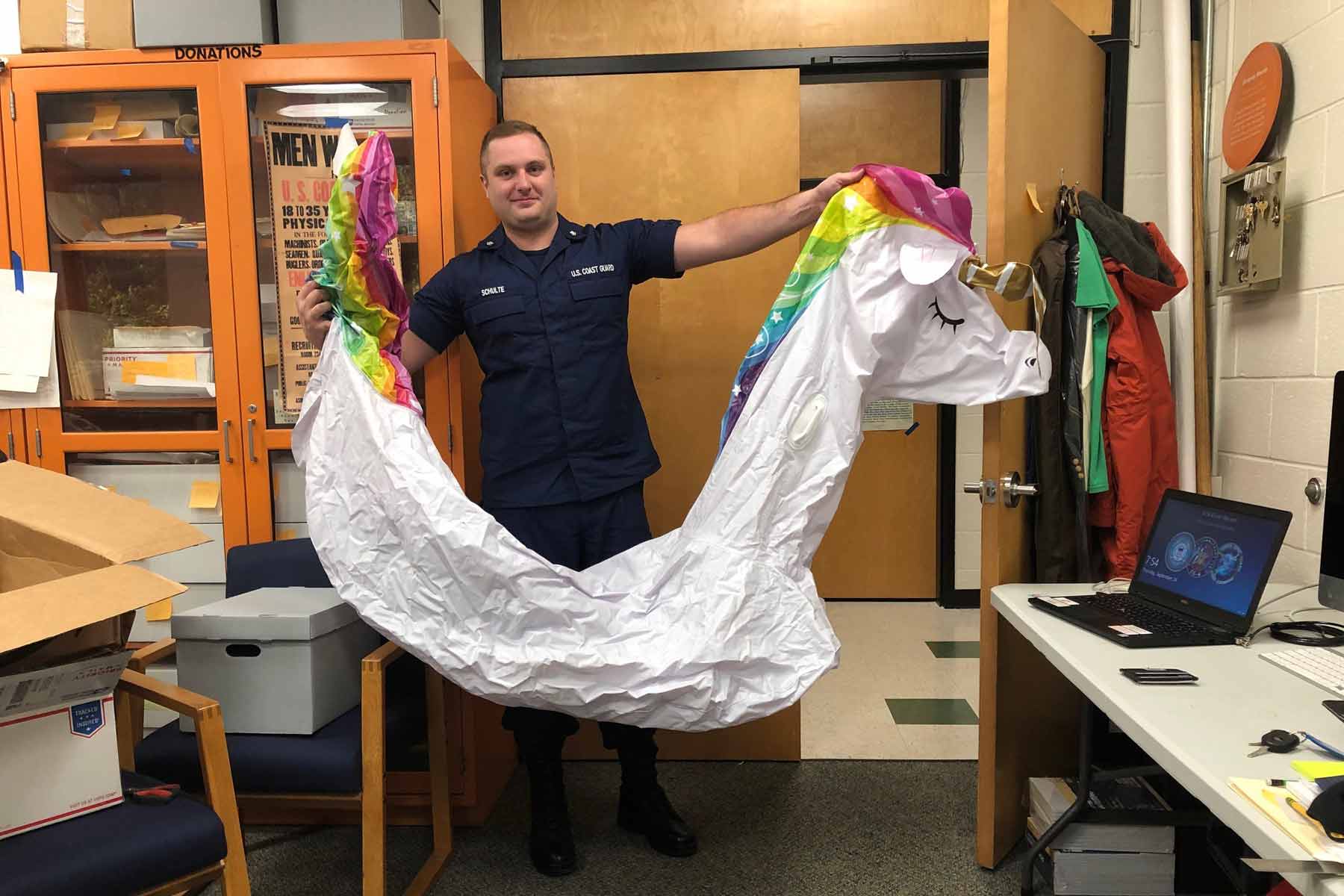 Museum staff posted a photo Thursday of their latest acquisition, which will join the museum’s collection of mascots. The Kimball’s unicorn swim floatie will be displayed alongside such objects as a lighthouse keeper’s Salty Rabbit and Capt. Cluck, the mascot of the service’s aviation forces.

According to Museum Curator Jennifer Gaudio, the collection helps document Coasties’ off-duty time, and the inflatable unicorn, which has been signed by the Kimball crew, is the rare artifact clearly associated with recreation time — a swim call interrupted by a shark in Oceania this year.

“We like to find objects that represent an event but it’s often difficult to find one that is so recognizable,” Gaudio said. “When I saw the video, I reached out to the other curator and the chief historian to see if it was something we wanted.”

The Kimball crew was taking an afternoon swim break Aug. 26 during Pacific operations when an 8-foot visitor — either a longfin mako or pelagic thresher — showed up to join the fun.

Not knowing the shark’s intentions as it swam toward crew members, the designated shark watch, Maritime Enforcement Specialist 1st Class Samuel Cintron, opened fire between the fish and the Coasties to deter the creature from getting closer.

Cintron fired bursts into the water at least three times, giving the swimmers time to reach the ship or the ship’s small boat.

The only injury to a crew member was a scrape to a knee, obtained as the Coastie climbed to safety.

But if the inanimate unicorn had feelings, it would have been devastated by the treatment it received that day. After landing a safe spot on the ship’s response boat, the floatie was tossed overboard to make room for the humans and subjected to the dual indignities of being discarded and hearing crew members tell Cintron to shoot it.

What a relief it must have been when it was lifted out of the water for return to the ship. And now, to live in a museum.

“I wasn’t sure we had room. We are still in a 4,000-square-foot space. And it’s big. Much bigger than I expected,” Gaudio said.

The museum is expected to house much of the collection from the current Coast Guard Museum, and the unicorn is likely to make the move when the new facility is built, Gaudio said.

“They have expressed interest,” she said.