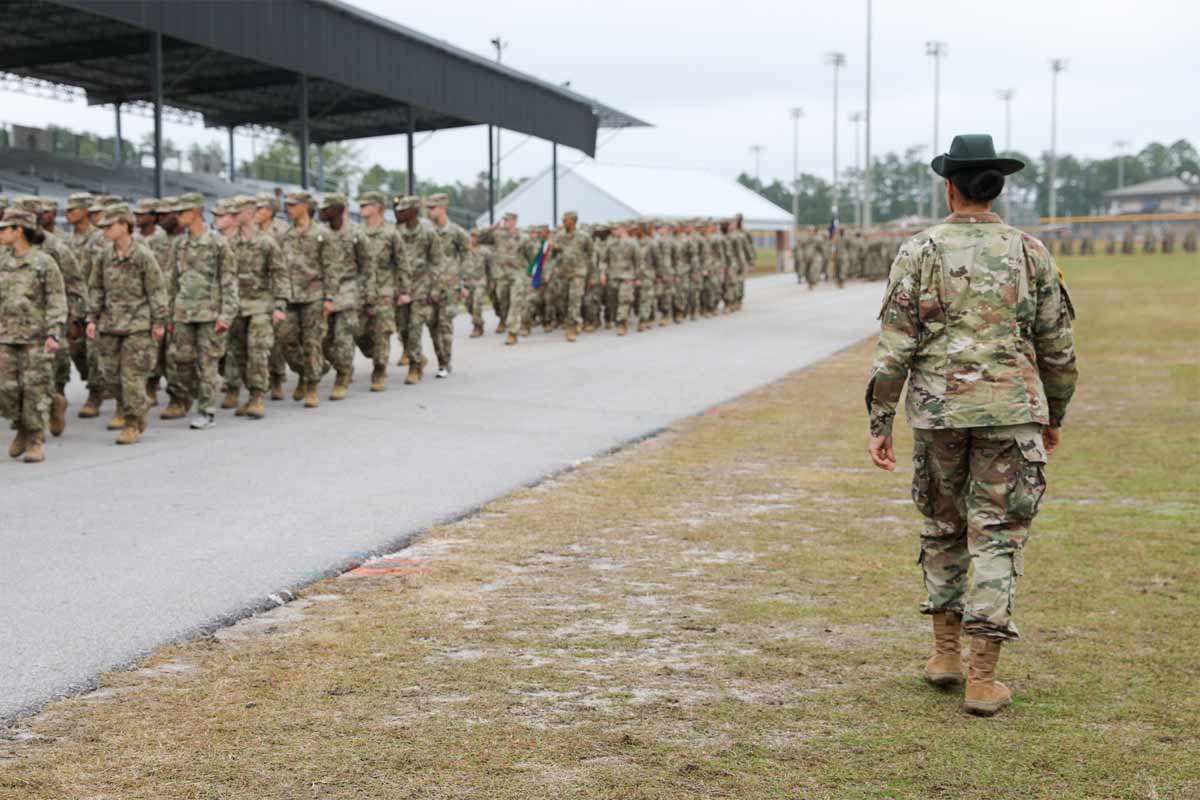 The U.S. Army has replaced the chaotic reception recruits entering basic training have long received from shouting drill sergeants with a training event designed to create a bond with their teammates and leaders.

Day one of Army Basic Combat Training has always been a rite of passage that involved menacing groups of drill sergeants descending on terrified recruits, yelling commands and ordering trainees to perform push-ups and other exercises with packed duffel bags strapped to their backs.

“Commonly referred to as the shark attack, this non-documented period of instruction was developed during our draft Army years,” Command Sgt. Maj. Robert Fortenberry, the CSM of the Infantry School at Fort Benning, Georgia, said in a video presentation at the recent 2020 Maneuver Warfighter Conference.

“Drill sergeants were charged with the [evaluating] trainees’ ability to handle stress, singling out the perceived undesirables by enveloping them in a manner that emulated a shark attack,” he continued. “This activity, however, does not instill the spirit of the infantry; it betrays the innate trust between teammates and, worse, betrays the crucial bond of trust with our leaders.”

Fortenberry described how Benning’s 22-week infantry one-station unit training has replaced the shark attack with “The First 100 Yards,” a new introductory training event being instituted at Basic Combat Training sites across the Army.

The new training exercise is designed to put new trainees through a series of physically and mentally challenging events that will build an initial foundation of “belief in one’s self, belief in your teammates, and a belief in the leaders with whom they serve,” Fortenberry said.

The Army began creating this new approach to the beginning of BCT during the spring, when it had to implement new safety procedures to help reduce the spread of COVID-19, Col. Richard McNorton, spokesman for Training and Doctrine Command, told Military.com.

Recruits coming in during the pandemic were already facing a highly stressful environment, so leaders at all the basic training bases agreed that the shark attack ritual should go, McNorton said.

“That’s not how we want soldiers to view our NCOs,” he said, adding that the new approach is being taught at the Drill Sergeant Academy at Fort Jackson, South Carolina. “It’s completely changed the dynamic of how we have done Basic Combat Training for the past 50-60 years.”

The First 100 Yards begins at the reception station a few days before trainees go to their BCT units. It covers information, which they will be quizzed on later, about their training battalion and motto, as well as unit chain of command and unit history.

On day one of BCT, trainees are organized into platoons and given a resupply mission, requiring each platoon to work as a team to complete an essential operation, Fortenberry said in the video, which shows footage of trainees running with boxes of Meals, Ready to Eat.

Platoons then conduct events from the new Army Combat Fitness Test, which is scheduled to replace the Army Physical Fitness Test across the Army on Oct. 1. They do the leg tuck, hand-release push-ups and the standing power throw, performing as many reps as possible for a combined platoon score, Fortenberry said.

“The platoons that fail to obtain the [highest score] will be given an appropriate corrective training exercise,” he said.

Drill sergeants will also quiz trainees about the information they learned at the reception station and dole out corrective training for incorrect answers.

The trainees are then instructed to retrieve their baggage, which is staged in a specific location, and move it quickly to the company training area.

“This is not designed to be a hazing event but [to] promote attention to detail and urgency to execute a task in a timely manner,” Fortenberry said.

Next comes a demonstration by a squad of infantry in full battle rattle, moving with M4 carbines and other weapons through smoke and pyrotechnics.

“The infantry demonstration squad inspires the trainees to stay the course and complete the last 100 yards of training,” Fortenberry said.

The First 100 Yards concludes with the drill sergeants marching trainees to their platoon bays to begin what will be the first two weeks of isolated training, known as “controlled monitoring,” as part of the COVID-19 safety protocols the Army began in the spring.

While it’s too early to have significant data on the program, McNorton said the Army plans to evaluate the effort to see whether it reduces attrition in basic training and advanced individual training.

“This is an all-volunteer Army, and we need to focus on building trust, teaching values, and connecting to them,” he said.

Fortenberry said the new training approach will help build teamwork and esprit de corps from the start of infantry training.

“It is critical that our newest generation of soldiers have the experience at the beginning of their journey to become an infantry soldier,” he said. “This lays the foundation for the next 22 weeks of infantry training.”

— Matthew Cox can be reached at [email protected]