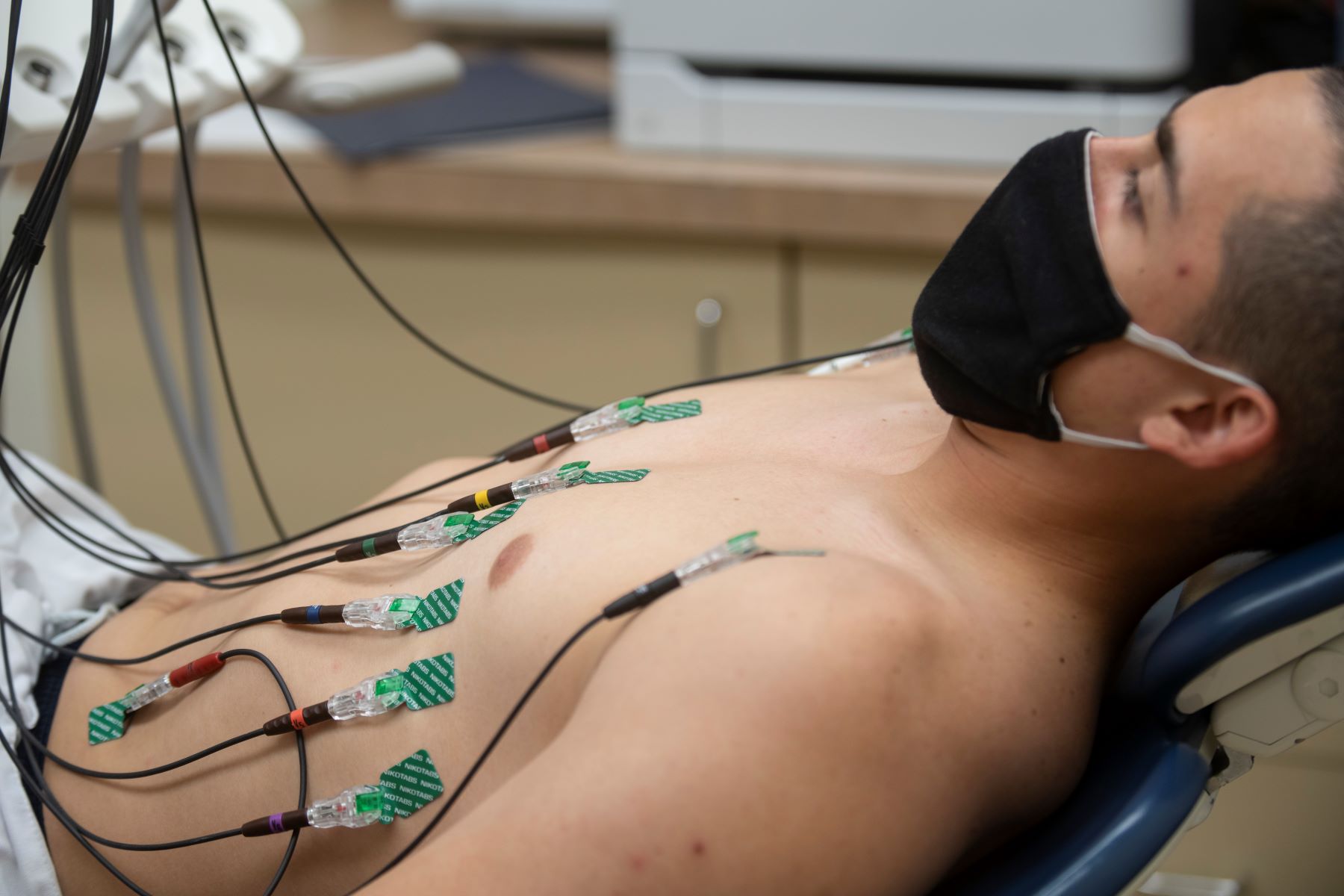 On April 1, 2019, Gillian Bush couldn’t shake the anxiety she’d felt over the previous 24 hours. In the classroom where she taught second grade in Overland Park, Kansas, she texted a fellow Marine wife in San Diego to ask whether she had heard anything about her husband, Gunnery Sgt. Paul Bush, an instructor at the recruit depot living there as a geographical bachelor.

“He didn’t show up to work,” came the reply.

Trying not to panic, Gillian made one phone call but learned little about her husband’s whereabouts. It was unlike Paul, a 16-year veteran of the Marine Corps, to miss work. The Bushes had been married eight years and had a toddler, and Paul was transferring back to Kansas for recruiting duty in two months.

But it wasn’t to be. As Gillian finished the school day, she received another text — this from a person expressing condolences and referring to her husband in the past tense.

Hours later, Gillian was sitting with a Marine Corps casualty assistance officer who confirmed the news: Gunny Bush, 33, had died in his sleep from what Gillian later learned was familial hypertrophic cardiomyopathy — an inherited disorder that causes thickening of the heart muscles.

He never knew of his heart condition, never experienced symptoms, never had an electrocardiogram or saw a cardiologist.

“It can be detected by an EKG. How was this not found? To work in a place that won’t let you in if you have a tattoo in the wrong place but doesn’t do a heart screening other than listen with a stethoscope?” Bush said during an interview Sept. 17.

Until 2002, electrocardiograms, also known as ECGs or EKGs, were part of routine screening to join the U.S. military. But they were notoriously famous for false positives, requiring expensive follow-on medical testing and handing young people potentially life-changing misdiagnoses.

With technology having advanced substantially in the past 18 years, and after two sudden deaths at the U.S. Naval Academy in February from sudden cardiac arrest, however, a group of Defense Department physicians is working to determine whether reviving the routine EKG for recruits would save lives.

An EKG is abnormal in roughly 80% of people with cardiac conditions associated with sudden cardiac death, or SCD, according to the physicians.

“The value of a resting [EKG] appears to have significantly improved with modern interpretation criteria and appears to represent an important screening tool for rare [sudden cardiac death, or SCD] heart conditions,” argued Dr. Mark Haigney, a research cardiologist at the Uniformed Services University of the Health Sciences, and Dr. Charles Magee, University of Virginia Medical Center internist, in the July issue of the journal Military Medicine.

In February, the Naval Academy lost two bright stars: quantitative economics major Midshipman 3/C Duke Carrillo, 21, who died Feb. 8 during the 1.5-mile run portion of the physical fitness test; and Midshipman 1/C David Forney, 22, a standout linebacker on the Navy football team, who collapsed in his room at Bancroft Hall on Feb. 20.

While sudden cardiac death remains rare in the military, the back-to-back events spurred Haigney to team with Capt. Adam Saperstein, the admissions medical officer at the academy, and Capt. Alaric Franzos, the Navy Bureau of Medicine’s director of medical readiness, to study the effectiveness of the EKG as a screening tool for SCD.

With a new system that uses advanced algorithms to reduce false positives and false negatives, as well as improve the reliability of EKGs, the physicians tested 1,178 incoming Naval Academy plebes this summer, screening 80 midshipmen a day over a period of nearly three weeks.

Of those midshipmen, roughly two dozen have been referred to Walter Reed National Military Medical Center for further evaluation — “less than expected and far less than traditional electrocardiograms,” according to the physicians.

Depending on their outcomes, the plan is to screen the entire brigade this academic year.

“This new device is increasing performance, reliability, and optimizing our evaluation of midshipmen,” Haigney said in a release. “Hopefully, this trial will demonstrate that we can save lives.”

Sudden cardiac arrest affects about 7,000 children under the age of 18 in the U.S. each year, according to the American Heart Association. It is the leading cause of non-traumatic sudden death in the U.S. military, especially among recruits.

According to Haigney and Magee, 108 of the 126 non-traumatic sudden deaths in the military were related to exercise and more than half of the cases demonstrated a clearly identifiable cardiac abnormality at autopsy.

To Laurie Finlayson, each data point represents a devastated family and a life of promise cut short. Her son, Marine Lance Cpl. David Finlayson, 25, collapsed and died in 2013 during a battalion training run. An autopsy revealed an enlarged heart.

“Right after he died, I said, ‘Let’s see his EKG from [the Military Enlistment Processing Station],’ but there wasn’t one. … What? You have three days of medical testing for people who enlist, but don’t do an EKG to check their hearts? I was dumbfounded,” Finlayson said

She and her husband John established the Lion Heart Heroes Foundation in 2014 to raise awareness of sudden cardiac arrest and push the Defense Department to again require EKGs for those who join the military regardless of accession point — at MEPS, the academies, officer candidate school, anywhere.

“I want all of our service men and women to have a chance to live their lives, to have a future,” Finlayson said.

She added that the EKG research at the Naval Academy is confirmation that her lobbying efforts are being heard.

“I’m ecstatic,” she said. “It makes it so that my son’s life and death had a purpose.”

Currently at MEPS and elsewhere, prospective recruits receive a thorough physical exam and complete a questionnaire. Their blood pressure and heart rate are measured, and a physician listens to their hearts with a stethoscope for murmurs, paying attention to the sounds of the mitral, tricuspid, aortic and pulmonic valve areas.

If an anomaly is detected, they get an electrocardiogram and a referral to a cardiologist.

Screening EKGs also are required for any service member applying to elite forces, such as the Army Rangers or Navy SEALs, or any high-intensity training program, including those for military occupational specialties that require taking survival, evasion, resistance and escape training.

His test results were normal, according to Ramey. Nonetheless, the athletic 24-year-old passed out March 19 during an open-water training swim at Naval Support Activity Panama City, Florida, and drowned.

An autopsy did not turn up any heart anomalies, nor did it reveal any other cause for the loss of consciousness. His family is waiting for results of genetic testing to see whether the airman had any congenital defects that may have contributed.

Although Baker had been screened and still suffered a sudden death, his mother believes the EKG has value.

“[EKGs] are not routinely done. We were lucky he had one, but [sudden cardiac death] happens so frequently, I think they very much should be done for everyone,” Ramey said.

At least four other service members have died this year of sudden cardiac arrest during or following physical training, including a 23-year-old member of the Arizona National Guard, as well as an 18-year-old and 19 year-old Marine.

The researchers at the Naval Academy are awaiting the outcome of follow-on care of the plebes before deciding whether to screen all students.

Officials said the process may be expanded to all recruits if the new technology is found to identify “previously missed cardiovascular issues … and does not overburden the existing system.”

Looking back, Bush said there may have been signs that her husband’s heart wasn’t functioning at top form. He frequently was exhausted — “We chalked that up to the job and the physical demands of the Marine Corps,” she said — and had been referred for a sleep study, which might have detected a problem.

But he never followed up.

“I think the military needs to be more proactive, not reactive. Why, after 16 years, was this not found? When everything happened, I did a lot of research — probably an unhealthy amount — but I wanted to know there was nothing that could have been done and it would have nothing to do with my daughter. Instead, I learned that an EKG could have detected it, and what Paul had is genetic, so she will have to be monitored.”

Finlayson recommends that parents of athletes have their children screened, especially if they faint often or experience dizziness by standing up too quickly, have a pounding heart or feel like their heart is fluttering.

“None of those symptoms are normal,” Finlayson said. “An EKG could save their life.”

Related: Midshipman Dies After Being Found Unresponsive at Naval Academy