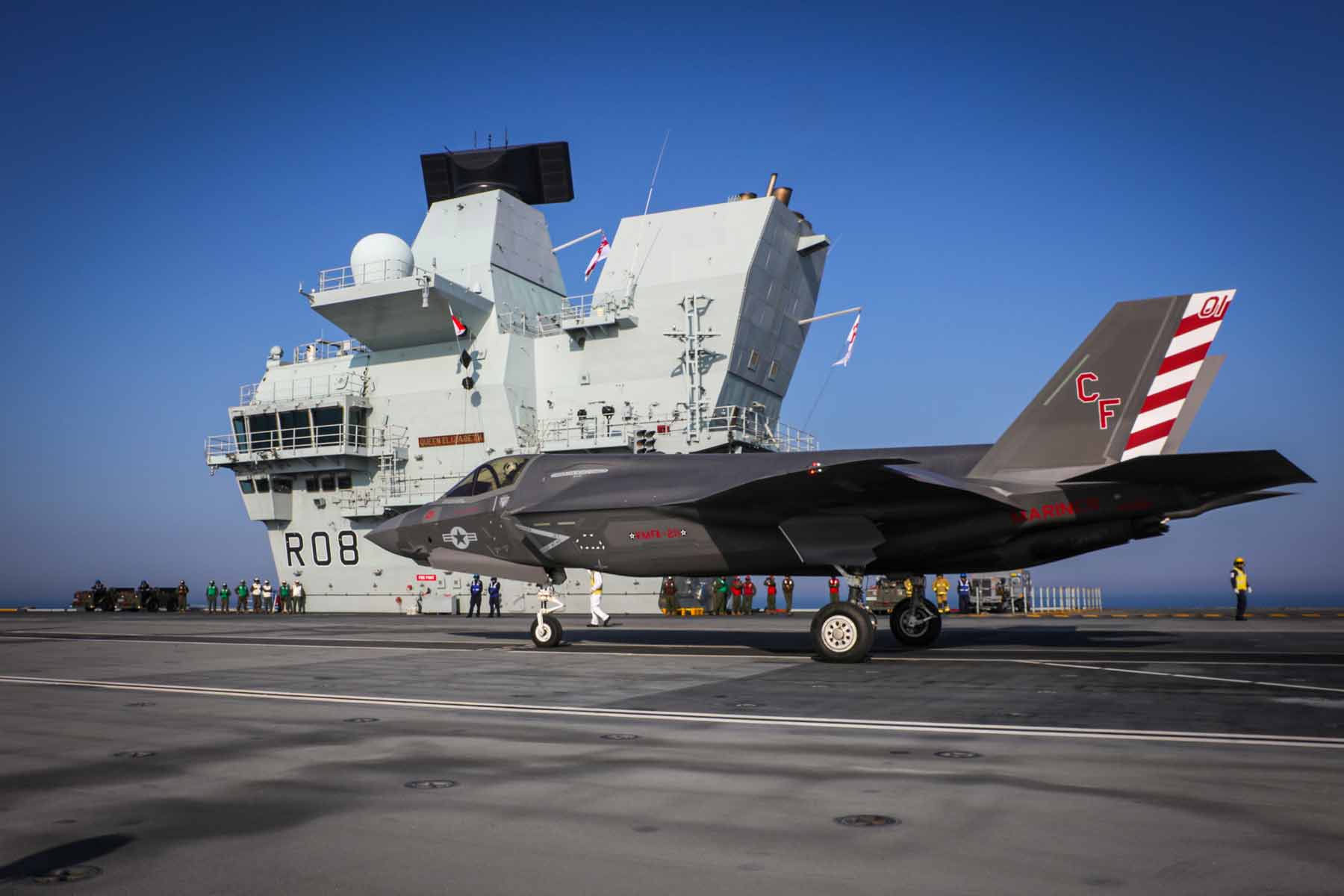 The Marines’ 5th-generation fighter jets have just departed on an unprecedented deployment — embarked not on a U.S. Navy ship, but on the United Kingdom’s only aircraft carrier.

Ten F-35B Joint Strike Fighters embarked the carrier Queen Elizabeth on Tuesday from Portsmouth, England, as part of a multi-month training deployment, according to a Marine Corps news release. It’s in preparation for the Queen Elizabeth’s inaugural full-length deployment, set to take place next year.

Read Next: Marines’ New Amphibious Combat Vehicles Will Start Arriving at Units Ahead of Schedule

The Marine Corps F-35s, from Marine Fighter Attack Squadron 211, out of Yuma, Arizona, will be joined in training by British F-35Bs from the U.K.’s 617 Squadron, “The Dambusters.” The Marine Corps and the U.K. are the only two entities that fly the B-variant of the F-35, which comes equipped with lift fans that allow for short takeoff and vertical landing — a crucial feature when operating from short flight decks at sea.

The Marines’ Joint Strike Fighters typically deploy aboard amphibious ships, which have smaller flight decks than Navy carriers. The Queen Elizabeth is a “ski jump” ramp-style carrier; part of preparation for the delivery of F-35Bs to the U.K. involved certifying the aircraft for ramp takeoffs.

“HMS Queen Elizabeth will be operating with the largest air group of 5th-generation fighters assembled anywhere in the world,” Commodore Steve Moorhouse, commander of the U.K. carrier strike group, said in a statement. “Led by the Royal Navy, and backed by our closest allies, this new Carrier Strike Group puts real muscle back into NATO; and sends a clear signal that the United Kingdom takes its global role seriously.”

Military.com reported last year that this rare joint deployment was being planned, hailed by U.K. and Marine Corps officials as an opportunity to strengthen alliances and highlight how well the two powers can interoperate.

“It’s going to be a wonderful new way — and I will offer, potentially a new norm — of doing coalition combined allied operations with a maritime partner,” Lt. Gen. Steven Rudder, then-head of Marine Corps aviation, told an audience at the Sea Air Space conference in 2019.

According to the new release, VMFA-211, nicknamed “the Wake Island Avengers,” will use the deployment as a chance to try new and innovative techniques to combine resources with their international partners “while collaborating on complex mission sets to maintain our Nations’ global maritime military advantage.”

The Queen Elizabeth carrier strike group will be joined on the full deployment by U.S. Navy ships, as well as warships from the Royal Netherlands Navy, making up the largest U.K.-led multi-national force in recent times, according to the release.

During the current underway period, the American and British squadrons will participate in NATO exercise Joint Warrior in Scotland, highlighting the stealthy capabilities of the highly networked F-35.

“This deployment demonstrates that our forces are more than interoperable — we are integrated,” Col. Simon Doran, senior national representative to the U.K. carrier strike group, said in a statement.. “During this special partnership, the U.S. Marine Corps and U.S. Navy will conduct carrier strike group operations, training to maritime power projection, and ultimately supporting shared security. Our alliance is stronger because we can deploy and fight together as truly integrated NATO allies.”

The Marine Corps took delivery of its first F-35Bs in 2014 and declared initial operational capability in 2015. The first F-35B squadron deployed aboard Navy ships with the 13th Marine Expeditionary Unit in 2018. The U.K. received its first F-35B in June 2016 and plans to have 24 aircraft by 2023.

Related: A US Marine F-35 Squadron Will Deploy on a British Aircraft Carrier in 2021