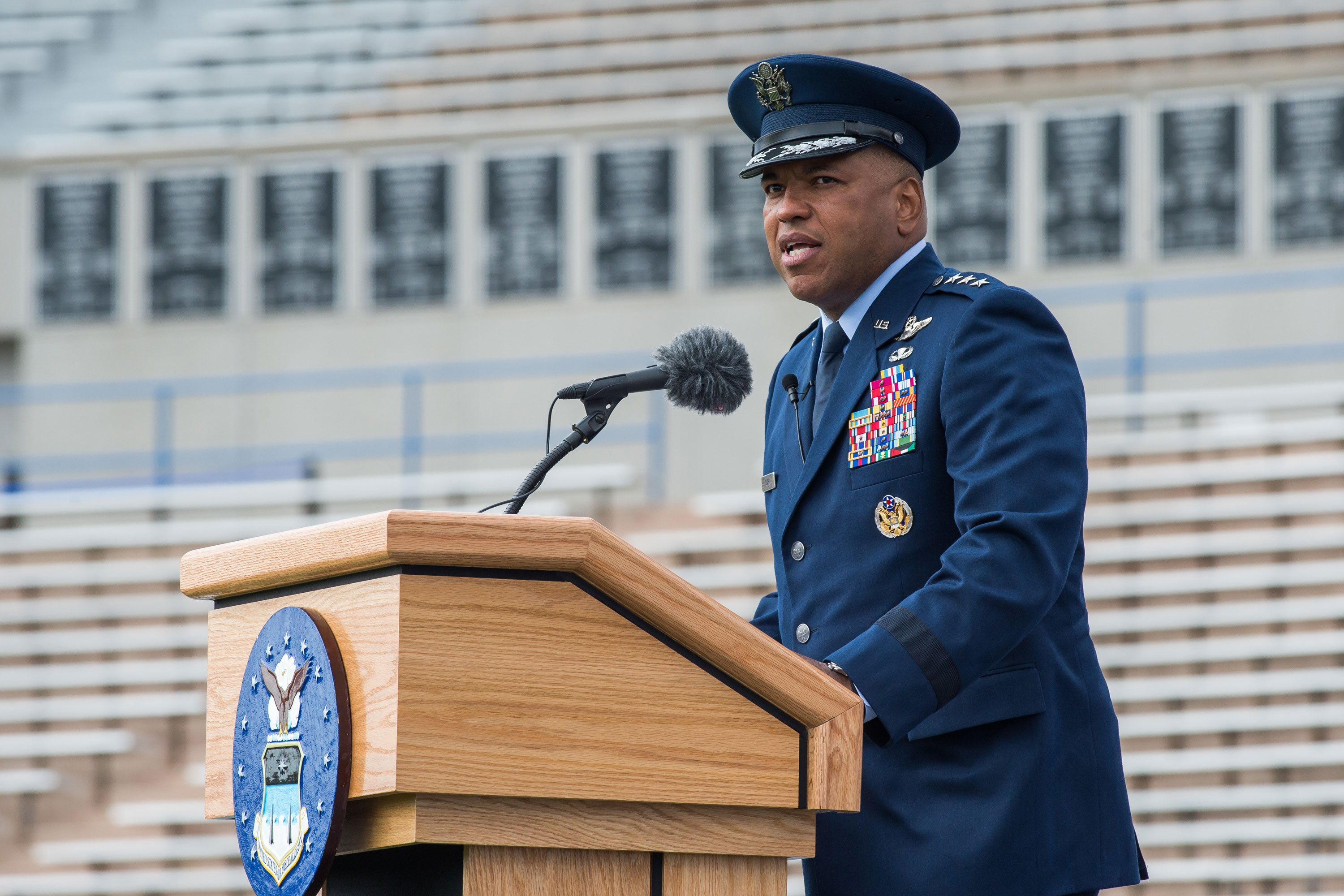 Clark, a 1986 academy graduate, is the first former commandant of cadets to come back for the three-star job. He’s also the first Black superintendent in the school’s 66-year history.

“I am honored to be part of that history,” Clark said after accepting his new post during an untraditional ceremony, held in the vast confines of Falcon Stadium to allow for social-distancing among the sparse, mask-wearing crowd of dignitaries.

Clark returned to the academy after a stint at the Pentagon, where he oversaw the Air Force’s nuclear weapons program. He brings a stack of academic accomplishments, four master’s degrees and a Harvard fellowship. He’s also a proven leader in the air: Clark has more then 4,200 hours in the cockpit, including 400 hours in combat zones in aircraft including the B-1 bomber and the EC-135 “Looking Glass,” America’s airborne command post in case of nuclear war.

Clark first came to the academy 1982, and his talents were soon noticed as a freshman linebacker in the stadium where he took command. A four-year letterman, Clark had 30 tackles, including six for loss, during the storied 1985 season that saw Air Force come within a touchdown of competing for a national championship. Also on that squad was freshman signal-caller Troy Calhoun, now the Falcons’ coach.

“I didn’t realize how much I loved it back then,” said Clark, crediting the academy for success that followed his college years.

“I am honored and privileged for the opportunity to give something back.”

Clark said he had been eyeing a return to the academy since his last stint as commandant, overseeing military training for cadets from 2010-12. He called the superintendent post his “dream job.”

The new leader was lauded by Air Force chief of staff Gen. C.Q. Brown and Air Force Secretary Barbara Barret at the ceremony.

“You are the perfect leader,” Brown said of Clark. “In fact, I cannot think of a leader more custom-made for this job.”

“Jay and his team led with care, compassion and decisiveness,” Brown said.

Silveria was known for stamping out racism in the ranks, taking on coronavirus and further infusing technology to the school’s curriculum.

Silveria praised Clark and thanked his staff and the school’s cadets in brief remarks.

“Changes of command are not about looking back, but looking forward,” he said.

Clark is already focused firmly on that future. He plans to build on Silveria’s technology initiatives, continue programs to foster a climate of “dignity and respect,” and firmly focus the school on growing competition from world powers like Russia and China.

“Our cadets have to be prepared to be part of the competition,” he said.

This article is written by Tom Roeder from The Gazette (Colorado Springs, Colo.) and was legally licensed via the Tribune Content Agency through the Industry Dive publisher network. Please direct all licensing questions to legal@industrydive.com.

© Copyright 2020 The Gazette (Colorado Springs, Colo.). All rights reserved. This material may not be published, broadcast, rewritten or redistributed.