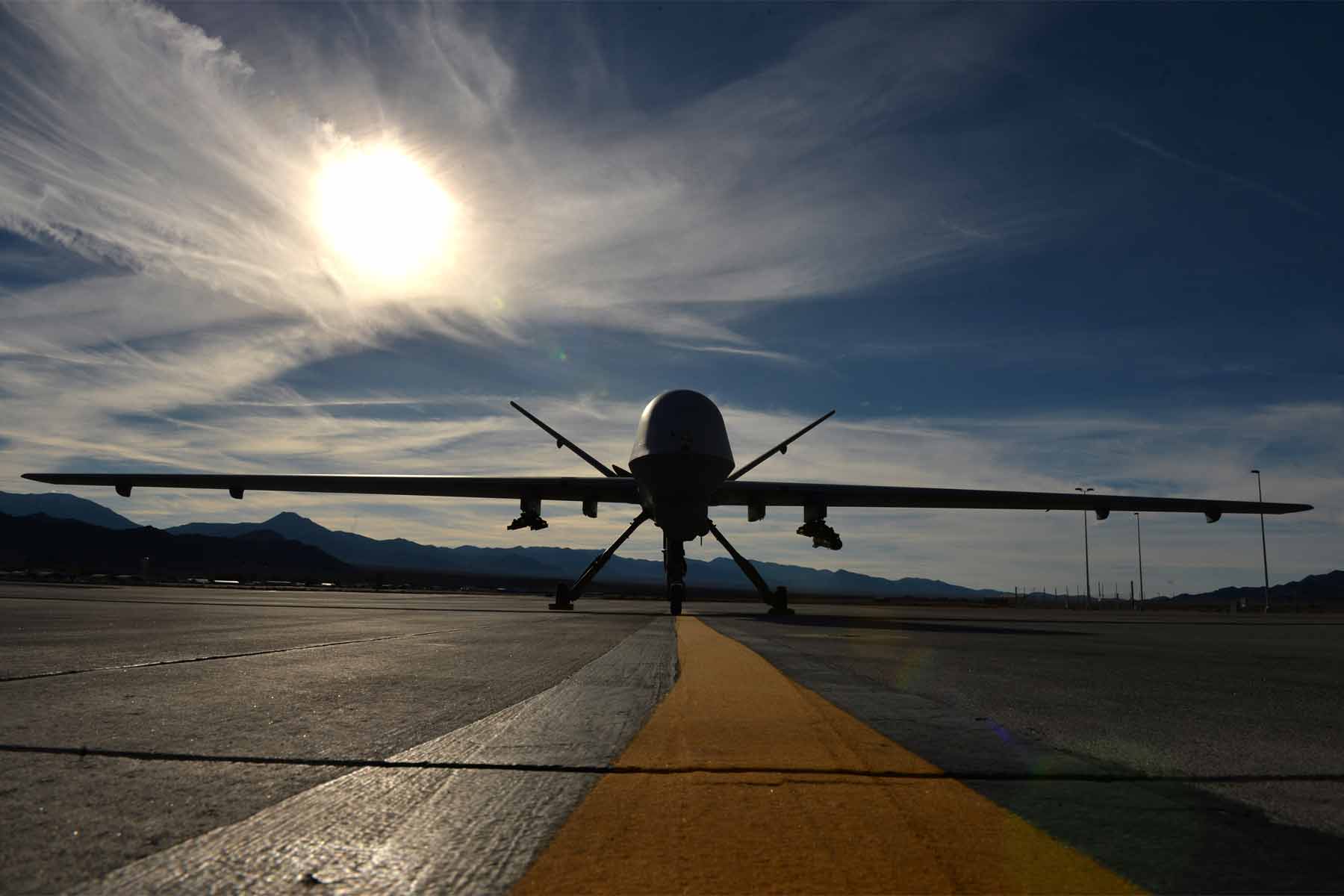 An airman sits at a control center inside a trailer on a base flight line. Next to him, another airman, the sensor operator, follows a moving target. Together, they operate an MQ-9 Reaper unmanned aerial vehicle, which acts as an eye in the sky for troops on the ground.

This is the way the service has conducted drone warfare for nearly 20 years — by employing a few airmen on a stateside base to conduct an hours-long flight somewhere else in the world before clocking out. That is, it’s the way it has been done until now.

During a recent exercise at Naval Air Station Point Mugu, California, the Air Force tested whether airmen at multiple locations could coordinate to execute the same MQ-9 sortie. The result proved that numerous airmen can operate the drone during its mission, according to Lt. Col. Brian Davis, 29th Attack Squadron commander, at Holloman Air Force Base, New Mexico.

The service used the same exercise to test whether it could use a slimmed-down profile of personnel, fuel and equipment to conduct full-scale MQ-9 operations, Davis said. That experiment was also successful.

“I can now take my capability and move it,” Davis said in a video interview with Military.com on Monday.

The MQ-9 uses satellite communication links, which enable the UAV to fly and to acquire and pass real-time imagery, video and other data through multi-intelligence processing centers and then back to operators.

Citing operational security, Davis did not disclose how airmen were able to test the latest capability to connect to multiple bases, but said, “It is a unique capability that other aircraft just don’t have.”

Most impressive, according to Davis, was the ability to conduct the exercise in more remote locations than airmen are typically stationed.

“It is not new that MQ-9 can go places and do it quickly,” he said. “But … what is entirely new [is] the ability to organically take my operation and put it anywhere I want to with a very small footprint.”

During the exercise, dubbed “Agile Reaper,” the MQ-9 conducted combat search and rescue, maritime strike coordination, and reconnaissance, among other missions, over the Navy’s Pacific ranges.

“We’re testing other Navy assets and Air Force assets out to strike simulated enemy vessels,” Davis said. “We’re conducting maritime close-air support for amphibious assaults out over San Clemente Island off the coast here, demonstrating that we can do that over any other island, whether it be the South China Sea, the Black Sea or any other adversary location that we might get into.”

In the Reaper exercise, the Air Force provided the Navy targeting data “in order to synchronize joint effects across multiple domains,” he said, without disclosing more information.

“Let’s just say it is impressive,” Davis said, when asked whether there were underwater targets.

Commanders have been expanding the MQ-9’s mission set since 2017. That year, the Air Force began phasing out its unmanned cousin, the MQ-1 Predator; the larger, faster MQ-9 bagged its first air-to-air kill of another small, aerial vehicle in a controlled test in 2017, showing it had the ability to conduct aerial combat. The MQ-1 officially retired in 2018.

“We have tremendous untapped potential right now as an enterprise,” Davis said of the growing mission. “It’s no longer just a person sitting in a seat somewhere in the United States flying a mission on the other side of the world. I would anticipate that we’re going to take it on the road even further into other parts of the world … and by next summer, I think you’re going to see us operating even further away outside of the continental U.S.

“We’re just scratching the surface of what it can do. And we are providing capabilities to combatant commanders that they have been looking for a long time,” he added.

The Air Force is already looking for a drone to replace the Reaper over the next decade.

In June, the service began asking companies to submit ideas for a next-generation hunter-killer drone, known as MQ-Next, to replace the MQ-9. According to a request for information (RFI) solicitation posted on the government’s acquisition and awards website, it’s seeking a drone that may incorporate artificial intelligence and could be inexpensive enough to be considered expendable.

Defense companies are gearing up to put in their bids. According to Defense News, Lockheed Martin and Northrop Grumman recently released proposed sketches of what their drones for the program would look like. So has General Atomics, which manufactured both the MQ-9 and MQ-1. Boeing and Kratos responded to the RFI, but have not released renderings, Defense News said.

Dr. Will Roper, assistant secretary of the Air Force for acquisition, technology and logistics, told lawmakers in March that, while the MQ-9 has taken on robust operations — encompassing both ISR and strike — for more than a decade, it simply isn’t suited to the high-end fight for which the service is preparing.

“The Reaper has been a great platform for us,” he said before the House Armed Services subcommittee on tactical air and land forces. “[But] there are things that are more high-end military unique, things that are meant to be able to survive even in a contested environment. A lot of technology will have to go [into that], and there will likely be expensive systems, but we also see a lot of opportunity to bring in commercial technology, push the price point down, have systems that … we can take more loss with.”

But Davis said there’s more life left in the MQ-9.

“We can put this operation literally anywhere in the world in a very rapid timeframe well inside of enemy targeting cycles,” he said. “[It’s] an extremely reliable platform that is going to do great things in the great power competition [space].