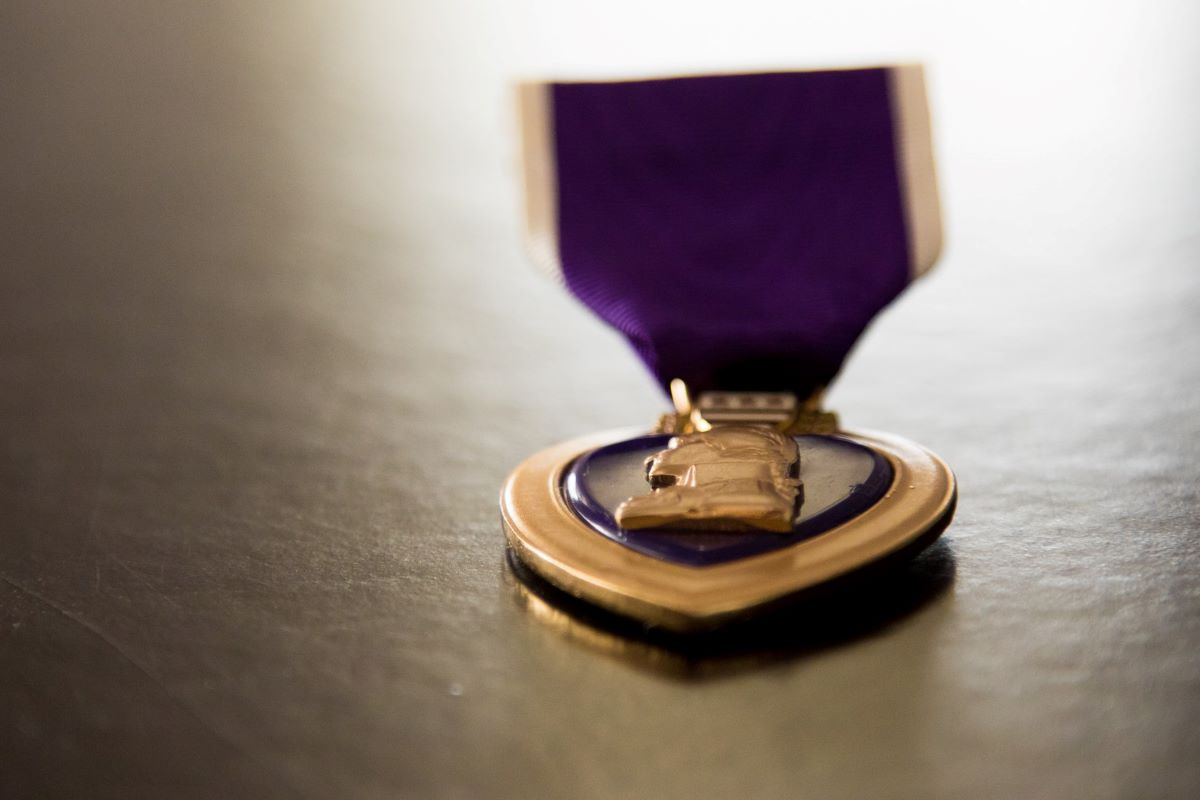 PORTLAND, Maine — There are plenty of battlefield relics inside the Veterans of Foreign Wars Post 6859 on Forest Avenue. In the lounge, behind a couple tables, a lighted display case shows off combat-captured bayonets. A Nazi flag and a Japanese sword sit silent, behind glass, in a trophy case near the seldom-used front door. Someone recently donated a foot-thick scrapbook with World War II-era newspaper clippings pasted, edge-to-edge, on both sides of each yellowed page.

Looking through some of these wartime artifacts in 2014, Post Commander Joel Demers stumbled on a mystery that would take six years to unravel. In seeing it through, Demers reunited a long-lost Purple Heart with a family that had spent decades searching for the medal. He also helped that family honor and remember a man they knew was a hero — and still grieved for — but never knew.

His name was Royce Gibson and he was one of the 156,000 D-Day soldiers who stormed the beaches at Normandy, France, starting the Allied liberation of Europe on June 6, 1944. Gibson died three days later, during a bayonet charge near the town of St. Mere Eglise.

While giving the last full measure of devotion to the cause of freedom that foggy morning, Gibson earned the Purple Heart. Over the next 70-odd years, the medal vanished, was found and was lost again, before finally making its way back home.

The story of how Gibson’s medal ended up in a Portland VFW hall lounge is an unlikely one. It’s so random and coincidence-laden, some involved think there must have been a higher power at work. While that cannot be proven, the verifiable facts make for a yarn worth spinning.

It started when Demers, a retired Marine originally from Buxton, noticed the overstuffed, tattered manilla envelope in a display case at the VFW hall half-a-dozen years ago. It didn’t seem to fit in with the other war souvenirs and he decided to look inside. Demers was surprised to find a Purple Heart, several photographs, a few letters and a key for a safety deposit box in London.

Gibson’s name filled the papers and was engraved on the back of the medal. Demers immediately knew that he wanted to find Gibson’s family and give them the envelope’s precious contents.

“Somebody just stuffed it in the case,” Demers said. “It was just sitting there, collecting dust on a shelf. I thought the family — somewhere — might cherish this stuff. He basically died on D-Day. That’s pretty pronounced in a family history.”

Demers asked around the VFW post but nobody had ever heard of Gibson or had any idea how his things got into the display case. But while reading the envelope’s letters and doing internet sleuthing, a portrait of Gibson began to emerge. The rest of what’s known was filled in later, by the family and additional research conducted for this story.

Gibson was born in North Tarrytown, New York (now Sleepy Hollow), in 1918. He was captain of his high school football team and senior class president. Photos show a young man with a wide, easy smile and wave of shiny brown hair over his forehead.

Gibson then graduated from Maine Central Institute prep school in Pittsfield in 1939 and joined an ROTC program while at college in Maryland. At college, he played more football and was president of his fraternity. Gibson was commissioned an Army officer in May 1942. In October, Gibson married a Maine woman, Virginia Davidson, in Gardiner.

They didn’t have long together.

By January 1944, Gibson was in England with the 4th Infantry Division’s 12th Regiment. Six months later, on D-Day, Gibson roared up Utah beach with more than 23,000 other men. Their ultimate goal was to secure the port at Cherbourg. While the landing was relatively easy, the inland fight was not. On June 8 alone, the 12th Infantry lost 300 men.

According to an official after-action report, Gibson was commanding Company F, of the second battalion, on June 9. They pushed the Germans back through three fields that gray morning, rescuing three paratroopers who’d earlier been taken prisoner. Then, Gibson and his men battled through a swamp and up a hill, where the enemy was dug in deep.

“Company F charged in and dug them out with bayonets,” the report said. “No less than 25 Germans died on the bayonet points. But during this fight, an enemy machine gun opened fire from the left flank.”

Gibson was killed in the hail of bullets, near the town of St. Mere Eglise. He was 25.

Later that year, his parents received two letters from Europe about their son. Both were in the envelope Demers discovered.

“I knew Lt. Gibson fairly well,” wrote a Maj. K.E. Lay. “I have heard other officers speak of him and they always spoke highly of his work. They spoke of his bravery, courage and leadership.”

Another letter came from a childhood friend, Gerald Hutchings, who was in the Navy. Hutchings wrote of finding Gibson’s grave in France that summer, not far from where he died.

“It’s a pretty place. The colors are always flying and a sentry is always on watch,” he wrote. “I placed the flowers, and held Royce’s dog tag in my hand and said a prayer, as you would have, had you been there.”

By August, Gibson’s parents received word from the War Department that he’d won the Purple Heart. The award was first created by George Washington in 1782 as a service medal. Later, in 1932, the United States government began awarding them to soldiers and sailors injured or killed in combat.

“Nothing the War Department can do or say will in any sense repair the loss of your loved one,” said the letter from the government, which Demers also found in the envelope. “He has gone, however, in honor and the goodly company of patriots.”

Later, in 1948, Gibson’s body was reburied in his hometown.

Gibson’s brother Archibald, a captain in the tank corps, survived WWII. Sometime after the war, he moved to York Harbor. It’s believed he brought Gibson’s papers and Purple Heart with him. Archibald died in 1980, with no heirs, and the medal vanished for 20 years.

In 2000, York Harbor restaurateur and designer Denise Rubin found it at an auction preview in Portsmouth, New Hampshire. Rubin had gone to the affair looking for antique decor for her eatery, On the Marsh.

“There was this cardboard box. I walked over and rifled through it,” she said, “and there was this Purple Heart.”

As Rubin held it in her hand, her mind turned to her father, a WWII veteran, now buried in Arlington National Cemetery. He’d earned his own Purple Heart, fighting in Italy. Rubin knew how much the medal meant to her family and her heart broke. She imagined the orphaned laurel ending up on a flea market table — or worse. Rubin knew she had to have it, to save it. Winning the medal turned out to be easy.

“Nobody wanted it. I bought the whole box for two dollars,” Rubin said. “I just welled up and cried. I thought there was a whole story, somewhere. Who was he? But I had no way to get it to his family.”

She checked with veterans organizations all over southern Maine and seacoast New Hampshire. Nobody had ever heard of Gibson. At a dead end in 2003, Rubin donated Gibson’s Purple Heart to a war medal display at the Dover, New Hampshire, VFW hall.

That post closed in 2006. Again, the medal disappeared. How it showed up, eight years later, in Portland is unknown.

But it did — and Demers eventually found Gibson’s family through the website Find a Grave.

Sometime after Demers started looking online six years ago, Sean Barr added an entry for Gibson on the site. Barr, of North White Plains, New York, is a distant relative. He was shocked to get an email from Demers in August.

“I initially thought it was a hoax,” he said. “I thought he was trying to get money out of me.”

Then Demers showed Barr the photos and Purple Heart during a video call a few weeks ago.

Barr was stunned and happy. Demers agreed to mail the whole lot to him.

“Not only did he not scam me, he wouldn’t even take money for the postage,” Barr said.

When the package arrived a few days later, Barr called his distant cousin Dan Drag in New Jersey. He knew Drag would want the medal.

Drag’s wife had just given birth to a son two months earlier. They’d named him Royce, after Gibson.

“We Facetimed and he showed me the medal,” Drag said. “I got more than a little emotional.”

Though he’d died two generations earlier, Gibson holds a special place in Drag’s life — and he’d been searching for the Purple Heart for years.

Drag grew up hearing stories about Gibson from his grandmother. Her mother and sister died when she was 10. She was raised as an orphan by aunts who lived next door to Gibson. He was older and became a guardian figure in her life.

“He was tall, handsome and captain of everything,” Drag said. “He’d introduce her to his friends and tell them she was special and they should take care of her. He was somebody I tried to live up to. I’d think, ‘What would Royce do?'”

Drag’s grandmother never got over Gibson’s death and would still cry talking about him in her old age. The only thing she had to remember him by was a bullet casing she picked up off the ground following the 21-gun salute fired over his reburial ceremony.

When she died, the brass casing came to Drag.

“It’s all I ever had to give my son,” he said. “Until now. He was named after a man who was very important to my family — someone who took care of people.”

For decades, Drag has searched for any information he could find about Gibson. In 2005 he visited Utah Beach in France, walking the sand where Gibson fought in 1944. Later, while watching the 2010 WWII documentary “Mother of Normandy: The Story of Simone Renaud,” Drag caught a glimpse of Gibson’s name clearly painted on a graveyard cross in a vintage photograph taken in France.

But what he really wanted to find was the Purple Heart. Drag knew it was out there and flipped over countless medals at memorabilia shows, looking for Gibson’s name. Drag trolled online auction sites, too, but never found anything.

Now he has it and Rubin — who found the medal 20 years ago — doesn’t think it found its way to baby Royce by chance alone.

“I feel like we’ve completed the cycle,” she said. “There was definitely a force at work here. It was meant to get back.”

Drag said he understands what she means.

Supernatural interventions notwithstanding, Demers — the man most responsible for getting the medal back home — is just glad Gibson’s memory still burns in the family.

“It’s awesome,” Demers said. “This guy served and gave his life. It seems like he was — and is — very loved.”

This article is written by Troy R. Bennett from Bangor Daily News, Maine and was legally licensed via the Tribune Content Agency through the Industry Dive publisher network. Please direct all licensing questions to legal@industrydive.com.

© Copyright 2020 Bangor Daily News, Maine. All rights reserved. This material may not be published, broadcast, rewritten or redistributed.