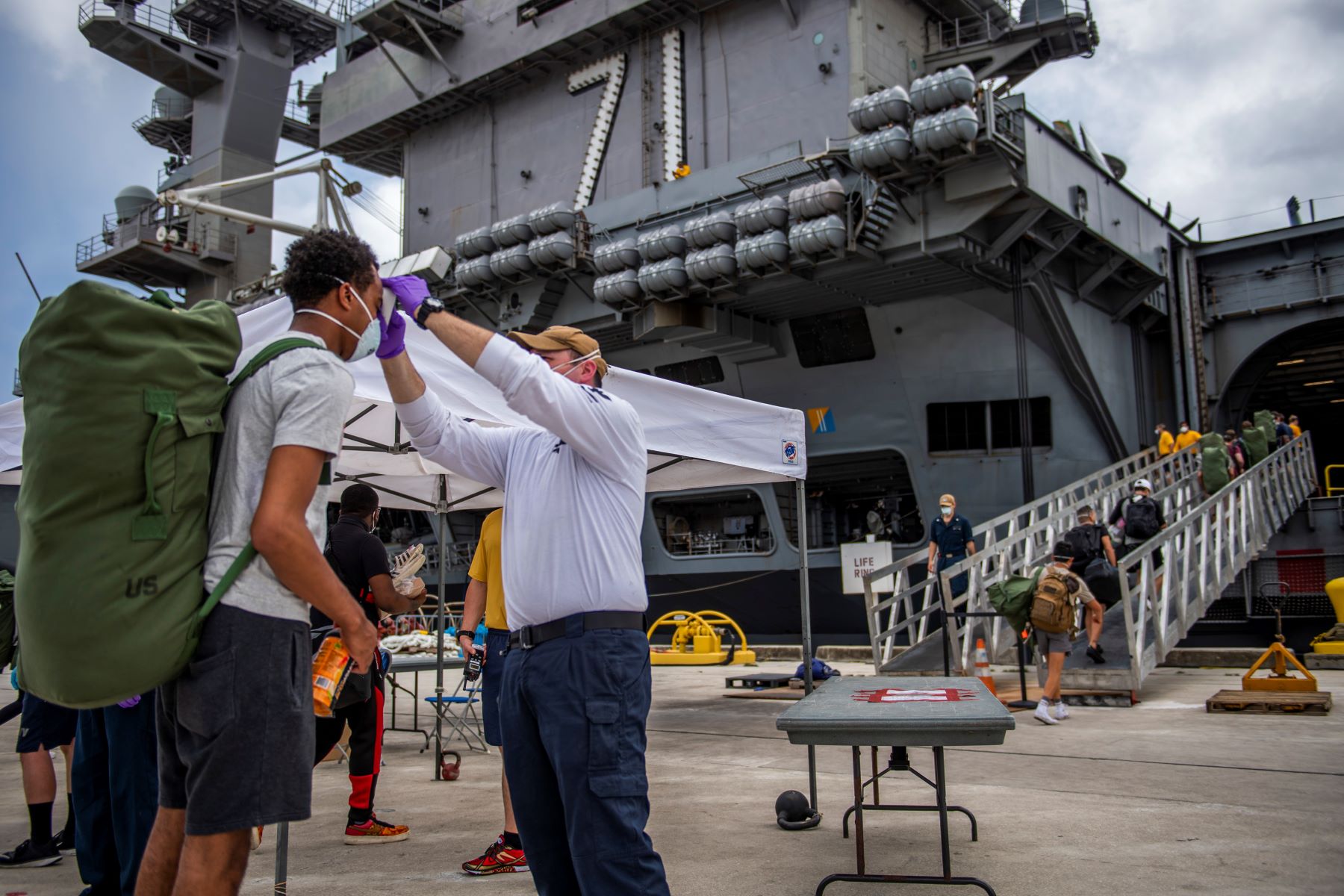 The Navy this week released its full 1,897-page command investigation into the communication, decisions and actions that took place during a coronavirus outbreak on a deployed aircraft carrier.

The quickly spreading outbreak on the carrier Theodore Roosevelt ultimately left nearly 1,300 crew members testing positive for COVID-19, the illness caused by the new coronavirus that caused a global pandemic. The situation led Capt. Brett Crozier to send a blistering warning to other Navy leaders in March about the worsening situation.

Crozier was later removed from his position as the Roosevelt’s commanding officer for his handling of the situation. Former acting Navy Secretary Thomas Modly stepped down shortly after, having faced scrutiny over his decision to travel thousands of miles to address the ship’s crew over a loudspeaker in a controversial speech following Crozier’s relief.

Read Next: Inside Black Widow, the Navy’s New Sub-Hunting Exercise to Challenge Russia

Top Navy leaders waffled in their handling of Crozier’s firing, with Chief of Naval Operations Adm. Mike Gilday first recommending the captain be reinstated as the carrier’s CO, only to backtrack following a broader probe.

“It is my belief that … Capt. Crozier fell well short of what we expect of those in command,” Gilday said in June.

The Navy has now released its full investigation into the matter, including several never-before-seen witness statements. Below are six major findings of that probe.

At least one leader regretted stopping in Vietnam.

Navy officials have said they’ve found no fault in the decision to allow the Theodore Roosevelt and one other ship to make a port call in Vietnam in the early days of the pandemic, when the illness was spreading in the region.

Adm. Phil Davidson, the head of U.S. Indo-Pacific Command who approved the decision, defended doing so in a July call with reporters.

“The decision to go to Vietnam … was done with the complete collaboration of U.S. Pacific Fleet, Seventh Fleet, the carrier strike group, the carrier, and certainly our embassy in Vietnam,” Davidson said.

Several officers interviewed during the investigation agreed that the port call was handled as safely as possible with the information the Navy had on the virus at that point. Despite the steps they took onboard to prevent any possible COVID-19 spread, the executive officer said their understanding of the virus was “not sufficient,” according to the report.

“Knowing everything I know now, I probably would not go into port,” he told investigators.

The report is heavily redacted, so it’s unclear if the person speaking was Capt. Daniel Keeler or Capt. Peter Riebe. Keeler, according to USNI News, took over for Riebe as XO on March 11.

Crozier explains the email that led to his firing.

In his own words, Crozier is cited in the report explaining his decision to email a warning about the situation on the ship, which was later leaked to a newspaper.

“My intent in sending the email on 30 March was to bring a sense of urgency to a rapidly deteriorating and potentially deadly situation onboard the TR and avoid a larger catastrophe and loss of life,” Crozier said in a witness statement. “Although my method may have been imperfect, I reached out to those in my Chain of Command whom I believed were in the best position to provide immediate assistance to expedite the necessary decision and action.

“Despite possible long-term repercussions to my career,” the captain added, “I acted in what I believed was in the best interest of the Sailors aboard TR.”

No one higher in his chain of command asked for the email, Crozier added. But the “pace of action was troubling to us.”

Crozier said the hope was to break the bureaucratic logjam and get the decisive action necessary to protect sailors.

“Even at a significantly lower mortality rate of 1% (compared with current 3-4% trends throughout the world at the time), we estimated that five to six Sailors could die if we didn’t take immediate decisive action,” Crozier said. “… I believe everyone involved was well intentioned, but some up the chain of command were proceeding more slowly than I would have liked.”

It wasn’t the captain’s intent to have the letter make its way to the press, though he acknowledged that his decision to send the email on an unclassified network ultimately increased the likelihood that it would.

“From my perspective, even just one more week of routine planning would have resulted in another week of exponential growth in positive cases and greater risk to more Sailors,” Crozier said. “We wanted to stop the administrative bureaucracy.”

There was concern over sailors hiding symptoms.

Once the Teddy Roosevelt stopped in Guam to increase social distancing and quarantine measures by unloading crew members, rumors were spreading about the conditions ashore. According to the report, they included claims about bad meals, no internet or phone service and uncomfortable cots.

The executive officer said the carrier’s leaders were worried some might even hide their symptoms to avoid leaving the ship.

“We did not want sailors hiding their conditions,” the XO said. “… Initially, the food quality was poor (not from [ship’s] galley) and the Sailors off-ship were not being fed properly. Many missed meals. Quality of life was initially tough off base. The Sailors certainly let people know they were unhappy via social media and family member inquiries.”

Gilday cited Crozier’s decision to release sailors aboard the Roosevelt from a designated quarantine area, which the CNO said potentially put others at risk, when explaining why the captain’s relief would be upheld. The investigation details a complex situation in the ship’s aft quarantine space.

Multiple witness statements, including from Crozier and the XO, detail what the report refers to as “human suffering” in the aft quarantine area. The large number of sailors there was “unmanageable,” one witness said.

“We had enough cases and enough close contacts that we were approaching half the ship being considered close contact,” a senior medical officer said. “The disease process was affecting enough squadrons and departments so that it was impossible to delineate a part of the ship as a quarantine area because it was so widely spread across the ship. The decision was made that the quarantine area was to be opened up, then individuals could spread out on flight deck and hangar bay to permit some distancing.”

Conditions were poor in the aft quarantine area, the XO said. The decision was made to cease onboard quarantine on March 29 when between 1,200 and 1,300 crew members — about a quarter of the ship’s population — were being isolated.

Crozier’s email warning went out the following day. They needed to find a place where they could properly quarantine the crew, he wrote.

The XO called the aft berthing plan “a failure.”

“I regret attempting it and would not do it again,” he said, according to the report.

There were alternate port options.

Before Navy leaders decided to have the Roosevelt stop in Guam, they were also considering sending the carrier to Japan, Hawaii or San Diego.

Hawaii and San Diego were ultimately ruled out “due to the limited medical evacuation coverage of responding aircraft,” the report states.

Leaders were also eyeing Marine barracks in Okinawa, Japan, even arranging for Marines to vacate their living quarters at Marine Corps Air Station Futenma, Marine Corps Base Butler, and outlying camps to make room for Roosevelt crew members, according to the report.

Crozier said in the report that “there was a sense of concern due to the time it would take to execute any of these plans.”

The Roosevelt ultimately pulled into Guam, a decision that was met with some concern from local leaders. Guam Gov. Lourdes Leon Guerrero told The New York Times how she made a plea to the Navy that the ship’s crew remain separate from the civilian population to prevent a widespread outbreak.

The carrier was in Guam for about two months.

As COVID-19 cases first began spreading on the ship, Crozier said they began preparing for the worst early on.

“We were reminded by … to review our command Casualty Assistance Calls Officer procedures to ensure we were prepared for a possible fatality,” Crozier told investigators.

One Roosevelt sailor, Chief Petty Officer Charles Robert Thacker Jr., a 41-year-old aviation ordnanceman, died of COVID-19 in April. Thacker had tested positive for the illness in late March and was moved off the ship and into isolation with other crew members with the virus.

Thacker was found unresponsive during an April 9 medical check and was moved to Naval Base Guam’s intensive care unit. He died there on April 13.

His spouse, a San Diego-based active-duty service member, was flown to Guam to be by Thacker’s side at the time of his death, Navy officials said at the time.

Related: Hundreds of Sailors Participated in a COVID-19 Antibodies Study. Here’s What Was Learned