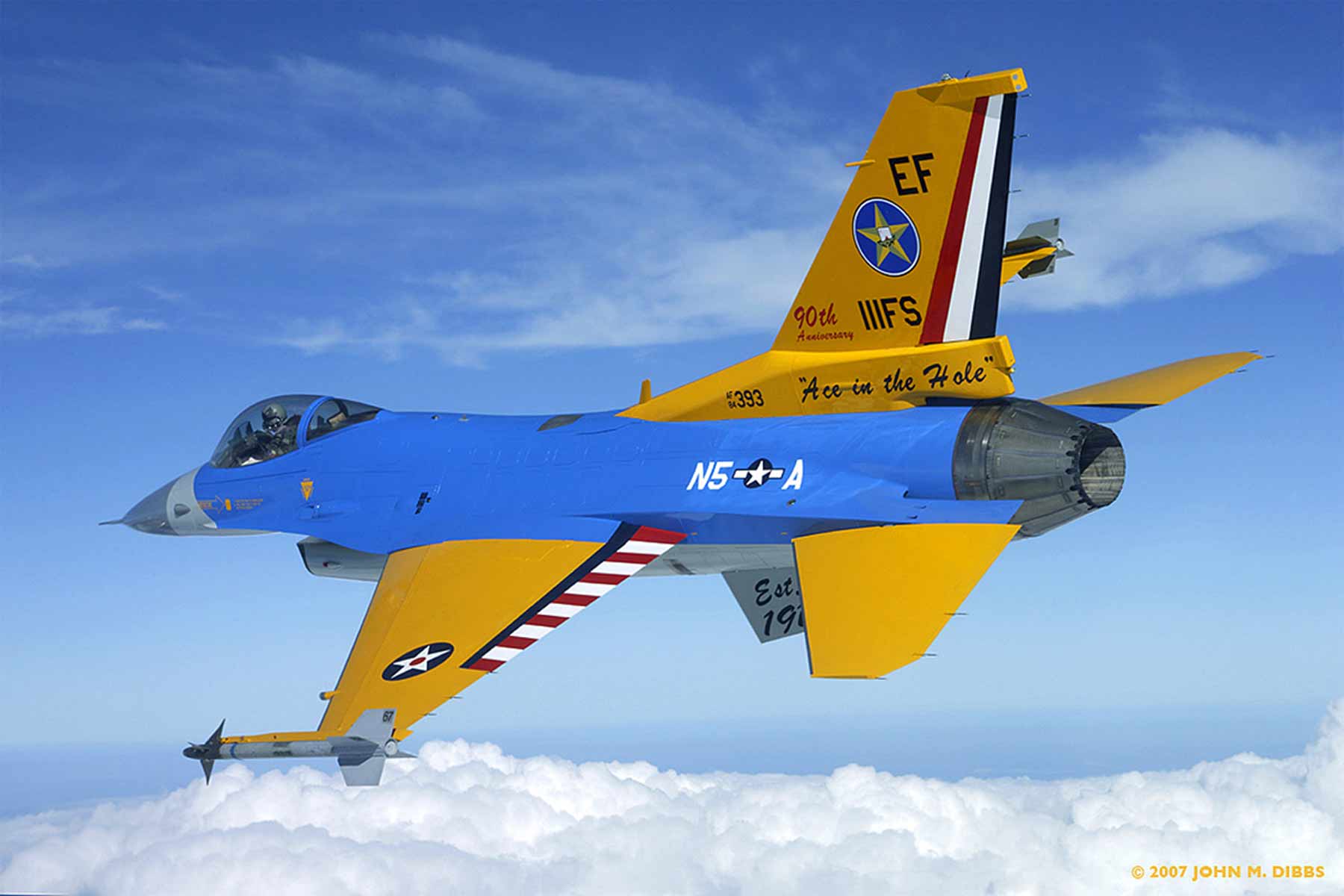 This article by David Roza originally appeared on Task & Purpose, a digital news and culture publication dedicated to military and veterans issues.

It’s the Air Force’s 73rd birthday today, and what could be a better way to celebrate it than to gaze upon the majesty that is one of the service’s most effective multi-role fighter aircraft? And in case there’s any confusion, we’re talking about the F-16.

So, pull on your flight suit, lean back in your cockpit seat, and get ready, because here come the Gs…

Some of the baddest — meaning the way they used it in the ’90s — F-16 paint jobs aren’t just for show. They are actually meant to prepare pilots for future threats they might face in unfriendly skies. The “Ghost” paint scheme, used by the 64th Aggressor Squadron (AGRS) at Nellis Air Force Base, is one of them.

What is an AGRS, you ask? Aggressor squadrons act as the bad guys in Air Force training scenarios, and the Air Force wrote that the “Ghost” scheme was “intended to replicate an adversary’s fighter jet.”

Which adversary could that be? Russia, most likely, as the scheme closely resembles that of the Sukoi Su-57.  Interesting side note: the 64th AGRS chose this paint scheme through a crowd-sourced vote hosted on Facebook by Brig. Gen. Robert Novotny, commander of the 57th Wing at Nellis Air Force Base.

“Social media gives me a chance to connect directly with the folks who have a similar passion for military aviation,” Novotny said in a press release at the time.

Much like with “Ghost,” the “Splinter” paint scheme was also inspired by “real world threats,” said Capt. Ken Spiro of the 64th AGRS when the design was unveiled in 2016. This time, the scheme took cues from the Su-35S, according to The Aviationist.

These paint jobs don’t happen overnight: It took nearly three weeks to finish the first version of this one.

“With this new paint scheme we have to paint one color at a time,” said Jeffrey Dezell, who, as the head of the M1 Support Services corrosion shop, was in charge of painting the jet. “It’s more labor intensive and takes longer to complete. It’s a one of a kind paint job that no one has done before.”

For those who prefer a more subtle look, the Wraith is here for you. The all-black paint scheme was inspired by,  you guessed it, a Russian fighter jet, and in all likelihood, the MiG-29, according to The Aviationist. Here again, Novotny used Facebook to crowd-source input on the paint job. However, this time the crowd only got to vote on the name, not the paint itself. Still, I’d say they chose the right one.

Some outfits never go out of style, and this WWII-inspired paint job is one of them. At least, the 149th Fighter Wing seemed to think so in 2017, when the wing celebrated the 70th birthday of the Air Force by painting one of its F-16s in the 1944 paint scheme of the 396th Fighter Squadron. Back in WWII, the squadron flew P-47 Thunderbolt fighters over Europe. If it looked anything like this jet, it looked damn good doing it.

It’s a bird, it’s a plane, no, it’s an F-16 … if you look closely enough. NASA used this unusual F-16XL High Lift jet for its Aero-Dynamic Flow Studies in High Speed Research in 1993. NASA was trying to help produce a high-speed civilian airliner, and the cranked-arrow wing design of the F-16XL provided a nice platform for testing a technology called supersonic laminar flow control. The transport idea didn’t work, but the XL experiments helped hone the art of computer modeling aerodynamic phenomenology, NASA wrote. Most importantly for our purposes, it looks cool.

No F-16 photo list is complete without the freedom-loving paint job of the Thunderbirds, the Air Force’s premier fighter demonstration team. First formed in 1953, the Thunderbirds have gone through multiple paint schemes and aircraft over the past 67 years, but they’ve flown the F-16 since 1982. How does the Air Force keep these planes looking so good? Windex. Lots of Windex.

“These jets are cleaned head to toe two or three times a day with wax and Windex,” said Thunderbirds crew chief Staff Sgt. Nathan Kearns in 2010. “We wipe off every little bug smear.”

“Fighting Falcon” is the official Air Force name for the F-16, but nobody calls it that. How come? Former Air Force flight test engineer Eileen Bjorkman explained why in her 2014 article about the jet for Air & Space magazine:

In 1980, the F-16 still didn’t have an official name. Pilots had dubbed the jet the “Viper” after the fighter spacecraft in the TV series “Battlestar Galactica.” Many pilots wore “Viper Pilot” name tags. Leadership demanded the pilots remove the tags, but the unofficial nickname stuck. Most everyone can agree it was far better than the aircraft’s eventual official name, Fighting Falcon, which could be the name of your middle school football team.

The Air Force’s F-16 Viper Demonstration team decided to take the name literally. Earlier this year, the crew gave it a snake scale pattern, complete with scales on the tail flash that match those on the team patch.

“The team’s goal behind the paint job was to keep it subtle, subdued, but true to the nature of the Viper Demo Team,” explained Maj. Garret “Toro” Schmitz in an email to Task & Purpose.

We had to bring an aggressor squadron back in at some point, and this black-grey-white entry used by the 18th AGRS was just too good to pass up. It’s a variant of the blue “splinter” scheme we listed earlier, but updated to prepare for new threats in the Arctic Circle, explained Lt. Col Brian Ford, the 354th Maintenance Group deputy commander, in a 2017 article about the paint job.

“Typically, to fully repaint an aircraft it takes about a week to two weeks,” said Tech. Sgt. Augustus White, the 354th Maintenance Squadron structural maintenance repair section NCO in charge. “This process takes a lot of man-power so we run a three shift operation to get it done.”

Some paint jobs are just really pretty, and this 2007 scheme from the 111th Fighter Squadron is one of them. A unit of the Texas Air National Guard, the 111th was celebrating its 90th anniversary and chose to paint its flagship in the colors and symbols of its history, the Air Force wrote. Here is the breakdown:

The 111th has since reorganized into a reconnaissance squadron that flies the MQ-9 Reaper, but its 2007 paint job is still one of the best out there.

Florida has carnivorous Mako sharks, and you know what else it has: the 93rd Fighter Squadron, which calls itself the “Makos” after the local fast-moving predator. The shortfin Mako can swim as fast as 25 miles per hour, with bursts of 40+ miles per hour, the Florida Fish and Wildlife Conservation Commission wrote.

This jet shows how stylish the F-16 can be with the right splash of paint. Also, notice the FM written on the tail, which stands for “Florida Makos.”

If you couldn’t already tell, animal patterns look great on F-16s, so our last entry for today is of a Colorado Air National Guard F-16C sporting tiger stripes for the Inaugural Tiger Meet of the Americas held at Buckley Air Force Base in 2001.

The American Tiger Meet mirrors the NATO/European Tiger Meet, which brings together military aviators from regional countries to foster camaraderie, teamwork and tactics familiarization, the Air Force wrote in 2001. If you want some more Tiger fighter plane pics, just check out this Wikipedia page about it.

© Copyright 2020 Task & Purpose. All rights reserved. This material may not be published, broadcast, rewritten or redistributed.